Day Two at The Open

Louis Oosthuizen set a 36-hole record at The 149th Open and is halfway to ending that run of near misses at the majors.

He’ll have to hold off a cast of major champions on the weekend at Royal St. George’s.

On a day of pleasant summer weather that took the fear out of the links off Sandwich Bay, Oosthuizen broke away from a three-way tie with a birdie-birdie-eagle run from the 12th hole. He shrugged off his first bogey of the week for a 5-under 65 and a two-stroke lead on Friday.

Former PGA champion Collin Morikawa had a 64 and was two shots behind.  Read more

From the Irish Examiner, by Paul Kean:

It's not so long ago that early retirement and life on his newly-purchased 90-acre farm in Florida appeared to beckon for Louis Oosthuizen.

A rancher at heart (the syrup-swinging South African also owns a 150-acre farm in his native country), golf isn’t even his first love.

But after a few lean years, he’s getting very good at it again...  Read more

From Yahoo!Sports, by Patrick McDonald:

It’s sometimes easy to forget that Collin Morikawa is only 24-years of age...

Friday morning at Royal St. George’s was far from tough for Morikawa. Having played in the more difficult conditions in the first-round, Morikawa started the day at 3-under and three-strokes back of the lead. An opening birdie kick started a round that had all the potential of going down in major championship history... Read more

From the Melbourne Age, by Mark Tallentire:

Cameron Smith has not been back to Australia for 19 months and though he cannot wait to get back home, he is putting his time to good use. His round of 67 on Friday afternoon in one of the later pairings at the British Open has him well-placed to challenge at four under.

Two bogeys in the first three holes left him in a difficult situation in a marquee three-ball with Rory McIlroy and Patrick Reed, but he got back under par at the eighth hole...  Read more 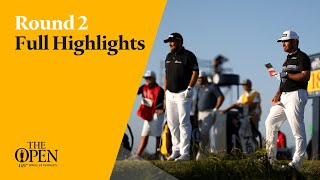