The 149th Open, Day 3: Oosthuizen keeps lead; Morikawa one back

Day 3: Oosthuizen keeps lead into final; Morikawa one shot back

A third round as undulating as the fairways at Royal St. George's ended how it started, with Oosthuizen holding off Collin Morikawa and Jordan Spieth, and three shots separating them.

Oosthuizen, a runner-up in the last two majors, overcame his first real wobble of the tournament on the back nine with a key par save on the 15th and an 8-foot birdie on the par-3 16th that led to a 1-under 69.

That put him at 12-under 198 as the South African stayed on course to be the first wire-to-wire winner at golf's oldest championship since Rory McIlroy in 2014.  Read more

South African Louis Oosthuizen held his nerve to lead the British Open by one shot after a gripping third round played out in bright sunshine at Royal St George's on Saturday.

Oosthuizen, the 2010 Open champion, had moved serenely to 13 under par with a birdie at the ninth hole before two bogeys, his second and third of the tournament, halted his progress.

Americans Jordan Spieth and Collin Morikawa joined him in a three-way tie for the lead but Oosthuizen then sank a 10-foot birdie putt at the par-three 16th...  Read more

Louis Oosthuizen saw his Open lead cut to one shot heading into the final day at Royal St George's but he remains in pole position for a second Claret Jug.

The South African, winner in 2010, held a two-stroke advantage after setting a record-breaking pace through 36 holes but it briefly vanished on Saturday. Americans Jordan Spieth and Collin Morikawa closed in to make it a three-way tie before Oosthuizen birdied 17 and edged ahead at 12 under par.

It sets up a thrilling final day.  Read more

From Sports!Yahoo, by Adam Schupak:

At the tender age of 24, Collin Morikawa can make his own history on Sunday at the 149th British Open.

Having won the PGA Championship in his first attempt in August 2020, Morikawa is attempting to win the British in his debut performance.  Morikawa was 6 years old when another American, Ben Curtis, became the last first-time winner of the British Open – and at Royal St. George’s, no less, in 2003. No player has ever won two different majors in his first try.  Read more

Louis Oosthuizen says he's ready to play his heart out to become British Open champion for the second time as he led for the third successive round of the 149th edition to go into Sunday's showdown with a one-shot lead.  Read more 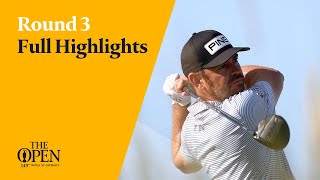