The end of the European Tour as we knew it, and the launch of DP World Tour

The end of the European Tour as we knew it, and the launch of DP World Tour

The European Tour group and DP World today jointly announced a ground-breaking evolution to their long-term partnership, with DP World becoming the new title sponsor of the group’s main tour from the start of the 2022 season.

The agreement heralds a new era in the history of the European Tour group, which, along with DP World, will celebrate its 50th anniversary in 2022, the first season of the newly named DP World Tour.

The new look DP World Tour will see total prize money break through the $200 million mark for the first time, with a new minimum prize fund of $2 million for all tournaments solely sanctioned by the DP World Tour.

In 2022, the DP World Tour will represent a truly global tour through an international schedule, that will feature a minimum of 47 tournaments in 27 different countries, including new tournaments in the UAE, Japan, South Africa and Belgium and an expanded Rolex Series comprising five events: the Abu Dhabi HSBC Championship, the Slync.io Dubai Desert Classic, the Genesis Scottish Open, the BMW PGA Championship and the season-ending DP World Tour Championship.   Full article here 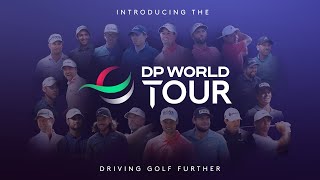