The Los Angeles Open - The Origins of Genesis

Origins of the Genesis Invitational

The Genesis Invitational was first played as the Los Angeles Open, in 1926, 95 years ago.

The Genesis Invitational is one of only five tournaments given "invitational" status by the PGA Tour.  Invitational tournaments have smaller fields and have more freedom in determining who is eligible to participate. The winner is granted a three-year tour exemption, rather than two.

This year's defending champion, Australian Adam Scott, first won here in 2005 after a playoff.  However that year the tournament was shortened to 36 holes due to rain, and because of that his win was not counted.  His 2020 win by two strokes may have felt to some extent as vindication.

The brief footage above is of the 1937 Los Angeles Open win by English-American golfer Harry Cooper, nicknamed 'Lighthorse Harry' (heard on the film). 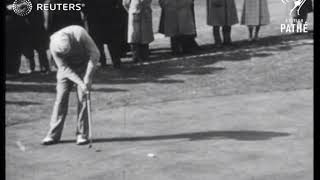