In the first collaboration of its kind, the PGA TOUR and the DP World Tour present ‘The Performance Review’, a short film, which sees actor John C. McGinley  (Scrubs, Platoon) grilling the biggest names in golf on their performances in 2021. The co-production features players from both tours, including: Collin Morikawa, Henrik Stenson, Scottie Scheffler, Justin Thomas, Jordan Spieth, Rory McIlroy, Tyrrell Hatton and Justin Rose.

From For The Win, by Andy Nesbitt:

There’s not a lot of professional golf going on right now but the PGA Tour was nice enough to drop some comedy gold on golf fans this morning with a year-end performance review video that is pretty darn funny.

Starring in this video is actor John C. McGinley, who plays a HR person like the one he played in the movie Office Space. He sits down with a number of big-name golfers and asks them about their years and their lives in hilarious fashion.  Read more

From Yahoo!Sports, by Grill Room Team:

Nothing is more fun in the office world than annual performance reviews (sarcastic tone). So, enter John C. McGinley, who portrayed a business consultant in the movie "Office Space," to add some levity. 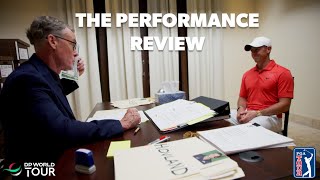