This week, The Open: "Every Hole at Royal St Georges" ...and more

The 149th Open at Royal St Georges, this week in Kent

In the video above, Golf Digest "takes you on a spectacular flyover tour of Royal St. George's in Sandwich, UK".

Ben Everill, at the PGA TOUR, gives a fascinating list of "Nine Things to Know - The Royal St Georges"

The Open Championship returns to Royal St. George’s this week for the first time in a decade.

It is the 15th time the Sandwich links has hosted The Open. The course will play to a scorecard yardage of 7,189 yards and a par of 70 this year.

The "Nine Things" include:

"Tiger Woods’ first tee shot here in 2003 led to the first lost ball of his professional career."   Read how it happened.

"Fleming, the creator of legendary MI6 special agent 007 James Bond, was one of the clubs famous members."  Read how Ian Fleming included the course in one of his best-read novels.

"After the 2011 Open Championship, the course underwent a historical review that led to some significant bunker work ahead of this year’s event.

"The infamous Himalayas bunker on the fourth hole had sleepers removed and it was restored to its older, rough-edged look."  Much more on the page.

The Shark at the 1993 Open at Royal St Georges, where "Norman knew he’d showcased the best of his Hall of Fame career".  Read how it unfolded.

Here again is the link 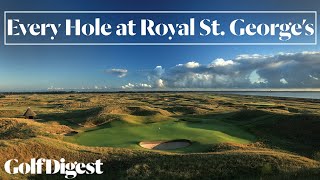