Tiger Woods wrapped up his first PGA Tour event in more than two years by hitting an even par 72,  ending the week's rounds with a  three-under-par of 213.  He improved by a shot each day and had four successive rounds of making par or better. He is good with that ("very pleased").

He laughed wryly as he gave his view of his third round game:  "Gross."  Out of 14 fairways he hit three,  and nine of 18 greens.  He made four birdies and two bogies.

“It was a struggle out there,” he said. “I didn’t hit it worth a darn all day. I was really struggling trying to find anything that was the resemblance of a golf swing. But I was scoring. I was chipping, putting, I was grinding.”

His struggle began with the first hole and in all, hit at least a dozen drives into the rough.

As he had said earlier, he is still finding out what his now fused spine can and cannot do.

His recovery shots from the rough and from bunkers were impressive,  and brought cheers from the crowd.

“The only thing I have is my short game and my heart,” he said, “and that got me through today.”

And, a heartfelt message for the fans:

“So many of the people I haven’t seen in a long time have come out this week, which is fantastic. I’ve played well here over the course of my career, and I think a lot of these fans just want to see some of that. And, trust me, I’m trying.” 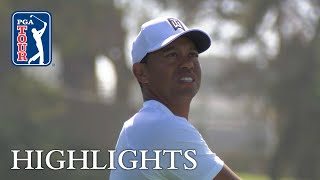