Crowds lined the fairways at Torrey Pines for the second day of the Farmers Insurance Open 2018.  Many were there primarily to see the return of a lifetime legend in action, and they remained riveted with cameras and mobiles held high.   Tiger Woods' charisma and determination were apparent.

At the end of round one on the South Course, Woods had a viable even-par 72.  Day two, on the North Course, soon became more of a challenge.  Woods drove the ball fiercely for much of the round.  His opening drive at the 10th hole went far left,  heading towards the South Course.  His second shot went into the rough to the right.

At the par-four 13th, his fourth hole, he curved his drive into a hazard and hit his driver into the ground. The ball was stuck in a bush.  The double bogey put him at two over par.

Birdies on holes 1,5 and 7 brought the game back on course. Then a bogey on the eighth meant that he faced his final hole, the par-4 ninth, needing a birdie to make the cut.  It required two putts from 80 feet, from sloping terrain.  His long shot took the ball to within inches of the hole.  His tap-in finished off a one-under par 71. 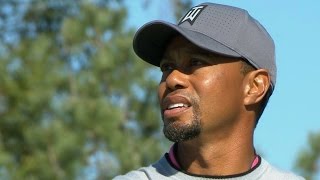