Tiger Woods Returns to Torrey Pines, then the Genesis Open

On Thursday Tiger Woods returns to Torrey Pines for the Farmers Insurance Open.  He has won this tournament seven times and he won the US Open here in 2008 "while basically playing on one leg" [ref PGA Tour site]. However last January he missed the cut.

In April he had another round of back surgery. This time it involved a spinal fusion, which has left him with a restricted swing.

"My swing is definitely shorter and I can't turn as far. My back is fused and that's as far as it's going to go," he commented.

"I'm continuing to progress and trying to get strong enough to where I can handle a workload again.

"I would love to play a full schedule in 2018. What that entails, including back-to-back events, I don't know. I just have to continue to work on my body and game and see where I pan out."

In December, just eight months after the spinal op, Woods finished 9th equal at the Hero World Challenge in the Bahamas.

After Torrey Pines, regardless of how he fares there, he is on to the Riviera CC for the Genesis Open which starts on 15th February.

Woods wrote on his blog,  "One way or another, I will be at Riviera.  It's such an historic site and the course will always have special meaning for me. That's where it all started back in 1992 when I played in my first PGA Tour event at age 16." 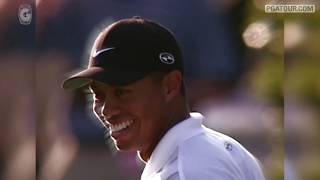