For the second year in a row Tommy Fleetwood, Europe's number one, has taken out the Abu Dhabi HSBC Golf Championship.  In testing conditions with gusting winds buffeting players and their game, Fleetwood drove through to reach 22 under par,  a two-stroke win over Ross Fisher,  closing at 65.

Last year Fleetwood showed his determination to fight on after challenges and bring his game back on course,  securing his longer term success.  In September 2016 he had fallen to no. 188 on world rankings.  Others in that situation have left the game completely.  Fleetwood instead returned to his former coach, Alan Thompson, and began making necessary changes. In January 2017 he fended off Dustin Johnson and won at Abu Dhabi. That win was more than sweet.

And yet this year, for reasons he himself does not clearly understand,  his win has affected him even more deeply.   "I feel a lot more emotional than last year.  I don't know why.  I had the year of my life last year. I know everybody has been talking about it, and just backing it up is the next big thing, really.  It's a weird feeling coming to defend a trophy because it's yours and you don't want to give it away.  Keeping hold of it for another year is very nice." 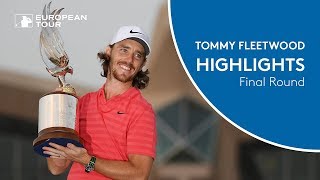