Finau closed with a 5-under 67 for a five-shot victory and a tournament-record 26-under 262 total. Taylor Pendrith (72), Patrick Cantlay (66) and rookie of the year front-runner Cameron Young (68) tied for second.

Finau coasted to his fourth career victory, a third title in 11-plus months. He was the 3M Open winner last week in Minnesota, where he rallied from five strokes back to win by three.  Read more

From Golfweek, by Adam Schupak:

If winning is a habit, Tony Finau may officially be addicted to it.

Finau, who had posted 39 top-10 finishes, including being a runner-up eight times between his first victory at the 2016 Puerto Rico Open and last August's win at Northern Trust, had gone 143 starts and a span of 1,975 days between titles.

The gap between wins three and four was significantly shorter. Seven days after Finau erased a five-stroke overnight deficit heading into the final round of the 3M Open to earn his third Tour title, he made it back-to-back wins by shooting a final-round 5-under 67 at Detroit Golf Club to clinch the Rocket Mortgage Classic in The Motor City by five strokes over Patrick Cantlay, Taylor Pendrith and Cameron Young.  Read more

Beginning the final round, both Tony Finau and Taylor Pendrith were in a share of the lead as an exciting day lay ahead at Detroit Golf Club. 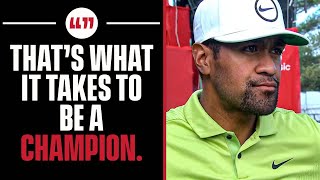