BLAINE, Minn. (AP) — Tony Finau shot a 4-under 67 to win the 3M Open by three strokes Sunday, erasing a five-stroke deficit with 11 holes left as Scott Piercy tumbled out of the lead down the stretch at windy TPC Twin Cities.

Piercy followed his tournament-record 54-hole score with a wince-inducing 76 to tie for fourth, four strokes back...

Finau made a 31-foot putt for birdie on the 15th green to strengthen his grip on the lead, as the 6-foot-4 Utah player calmly and confidently walked the TPC Twin Cities course in his white hat and aqua-striped polo.  Read more

Tony Finau rolled in four birdies on the back nine, including three in a row to break away from the pack Sunday and win the 3M Open at TPC Twin Cities.

Finau's four-under-par 67 lifted him to a winning score of 17-under, with South Korea's Sungjae Im (68) and Argentina's Emiliano Grillo (71) tied for second three back at 14-under. Read more

Washington (AFP) – Tony Finau charged late to card a four-under par 67 on Sunday to win his third US PGA Tour title at the 3M Open as fellow American Scott Piercy stumbled down the stretch.

Finau, ranked 17th in the world, grabbed three of his six birdies at the 14th, 15th and 16th to pull away for a three-shot win over South Korean Im Sung-jae, who carded a bogey-free 68, and Argentina's Emiliano Grillo, who posted an even par 71.

Chasing Piercy for most of the day after starting five adrift, Finau had finally seized the lead when he got a great break at the par-three 17th, where his tee shot got held up in the rough and stayed just inside the line marking the water hazard.  Read more

At the 3M Open, there were celebrations and commiserations as Tony Finau claimed a third PGA Tour title in commanding fashion.  However, on a final round where he was looking for a first win since 2018, overnight leader Scott Piercy struggled, as he collapsed over the back nine to finish five-over-par for the day.

Such was the collapse of Piercy that Finau saw himself go from four shots behind to four shots ahead in just 90 minutes!  Although it was partly down to the American's collapse, Finau was superb over the back nine, with a closing 67 giving him a three shot win.  Read more 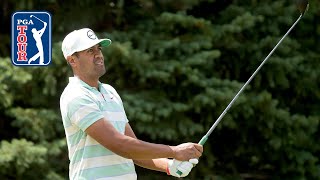