Cameron Smith increases his lead on Day 2 at Kapalua

KAPALUA, Hawaii — The scenery off Kapalua suggests a chill vibe. The scoreboard at the Sentry Tournament of Champions delivered a clear message to get a move on it.

Smith opened with two straight bogeys to not only lose his one-shot lead, but fall completely off the first page of the leaderboard. And then the Australian made a sensational recovery, capped by four straight birdies at the end for a 9-under 64 and a three-shot lead.  Read more

Overnight leader Cameron Smith remained atop the first page of the leaderboard through two rounds of the Sentry Tournament of Champions.

He has plenty of company.

In ideal scoring conditions – gentle breezes, soft greens, huge fairways, and preferred lies – players took apart the Plantation Course at Kapalua and set up a weekend ripe for a stampede full of birdies and eagles to Sunday’s finish line.

Smith, who overcame a slow start for the second consecutive day – he began bogey-bogey – stormed back with an eagle and nine birdies in his last 14 holes to sign for a 9-under-par 64 Friday to reach 17 under. That tied the 36-hole tournament scoring record first set by Ernie Els in 2003.  Read more

Cameron Smith shook off two early bogeys to card a nine-under par 64 on Friday and push his lead at the US PGA Tour Tournament of Champions to three strokes over top-ranked Jon Rahm and Daniel Berger.

Smith's 17-under par total of 129 on the par-73 Plantation Course at Kapalua, Hawaii, matched the tournament's 36-hole record set by Ernie Els in 2003.

Spain's Rahm carded a second straight bogey-free 66 for 132 and shared second on 14-under with Berger, who also posted a bogey-free 66.  Read more

From among the other Aussies at Kapalua, Marc Leishman is also in the top 10, - T8,   while Matt Jones and Cam Davis are T15. Lucas Herbert had a 73 round, finishing even par. His 4-under 2-round total has him still one place above defending champ Harris English. 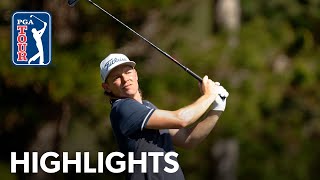