BROOKLINE, Mass. (AP) — Adam Hadwin wasn't officially in the U.S. Open until eight days ago. He walked off The Country Club on Thursday with his best score ever in a major for a one-shot lead.

With the focus finally shifting away from Saudi-backed rival league, who's going and who's staying on the PGA TOUR, Hadwin opened with a 4-under 66 on a breezy but not overly punishing day at Brookline.

The lingering thoughts of the rival league came from Rory McIlroy, not from anything he said but with the golf he played.  Read more

Defending champion Rahm laughed off a mischievous daylight robbery and in-form McIlroy impressed on day one of the 2022 U.S. Open Championship.

Defending champion Jon Rahm's birdie at the last - which saw him sign for a one-under-par 69 - was all the more impressive considering he had his ball stolen! Two young spectators ran off with the Ryder Cup star's ball after his tee-shot landed in the rough, but he managed to make a three with a new ball thanks to a brilliant second shot and a delightful 20-foot putt.  Read more

From Independent.ie, by Brian Keogh:

He thrashed the sand in a bunker with the vicious air of a man with a grudge against Saudi Arabia, helicoptered an iron down a fairway and pulled his hat over his eyes after a closing bogey sullied a near-perfect Houdini act.

In short, Rory McIlroy wore his heart on his sleeve as he carded a three-under-par 67 to share the early clubhouse lead in the US Open at the Country Club of Brookline.  Read more

Adam Hadwin produced a brilliant birdie run to move into a one-shot lead at the 122nd US Open, where Rory McIlroy is part of the chasing pack.

Hadwin posted five birdies in a six-hole stretch on his way to an opening-round 66 at The Country Club in Brookline, giving the world No 105 a narrow advantage over a five-strong contingent on three under.  Read more

From FoxSports, by AFP with staff writers:

Australia has a host of players within touching distance of the lead heading into the second round of the US Open. But it was a different story for golf LIV defectors.

Adam Scott leads the Australian charge after shotting a one-under 69 on a day when only 25 players broke par.

Marc Leishman is the next best Australian, one behind Scott, with another US Open first-timer, Todd Sinnott, parlaying solid Asian Tour form into a round of 71.

Smith is one shot further back after carding three birdies and five bogeys in his opening round two-over 73, with Min Woo Lee just behind him as he tries to emulate his sister Minjee’s US Open success last week.  Read more

From Golf Australia:  US Open Round One Gallery 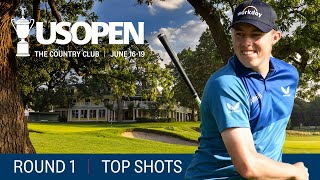