US Open Champion Matt Fitzpatrick had to get the gas, power, wifi and Sky turned on again when he returned home

US Open Champion Matt Fitzpatrick returned home to a cold, dark house, with no wifi, tv or hot water.

From the Mirror.uk, by Simon Bird:

Sheffield lad Matt Fitzpatrick became golf’s latest superstar by winning the US Open last month - but came down to earth immediately on his return to Yorkshire.

The 27-year-old got the star treatment in New York, was recognised in the street, and did a glittering round of interviews after winning in Brookline.

But he flew back to the UK ready for the Scottish Open this week and the Open at St Andrews next week… to find no hot water, his TV subscriptions cancelled…. and only two builders from Manchester recognising him in the street.

While he was away from his Sheffield base his parents helped save him money by turning off his wifi, boiler and favourite television shows.

Having restored normality at his UK pad - thanks to his £3m winner’s prize money - Fitzpatrick can’t wait to tee up as a major winner at the Renaissance Club in North Berwick and St Andrews.  Read more 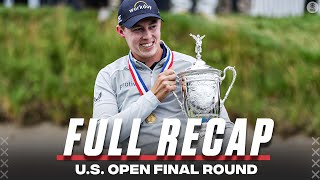