PLAYA DEL CARMEN, Mexico — Viktor Hovland won again on the PGA TOUR, this time without a clutch finish. The Norwegian star was too dominant to give anyone else a chance Sunday in the World Wide Technology Championship at Mayakoba.

Hovland seized control with three birdies on the front nine, and never let Scottie Scheffler, Justin Thomas or anyone else get closer than three shots the rest of the way.

He closed with a 4-under 67 for a four-shot lead over Carlos Ortiz of Mexico, making him the first repeat winner since Mayakoba began in 2007.  Read more

Norway's Viktor Hovland defended his title at the Mayakoba Championship in Mexico on Sunday, winning by four shots to secure his third PGA Tour victory.

The 24-year-old's four-under-par 67 in the final round at El Camaleon Golf Course saw him finish on a tournament-record 23 under par.

Hovland began the day with a two-shot lead and held off Mexico's Carlos Ortiz, who ended his round of 66 with five birdies in seven holes.  Read more

From CBS Sport, by Kyle Porter:

Hovland got to three wins in 57 starts faster than Jordan Spieth, Dustin Johnson and Justin Thomas.

For the first time in two-and-a-half years, a PGA Tour event has the same winner two years in a row. Viktor Hovland shot a 67 in the final round to finish at -23 on the week, defeating Carlos Ortiz by four and Justin Thomas by five to take the World Wide Championship at Mayakoba.  Read more

El Camaleón is certified by Audubon International as a Cooperative Sanctuary for its commitment to the environment and eco-friendly practices, working to protect and sustain the land, water, natural resources and wildlife habitats.  Read more

El Camaleón Golf Club:  The 7,039-yard course bends through three distinct landscapes - tropical jungle, dense mangroves, and oceanfront stretches of sand with holes bisected by massive limestone canals. The course even incorporates a cenote - an underground cavern common to the area - into the heart of the No. 7 fairway.  [Scroll to see photo at this link] 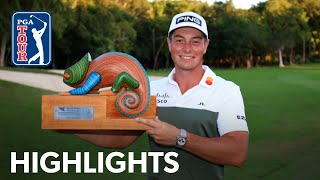