Day One: John Huh fires 61 for a two shot lead

GREENSBORO, N.C. (AP) — John Huh wasn't expecting the lowest round of his PGA TOUR career Thursday in the Wyndham Championship, and he had no complaints about the score or the timing.

Huh made seven of his eight birdie attempts from 10 feet or closer and holed a 40-foot eagle putt on the par-5 15th hole at Sedgefield for a 9-under 61, giving him a two-shot lead over Sungjae Im in the final tournament of the regular season...

Huh needed a round like this. He is No. 120 in the FedExCup and only the top 125 advance to the lucrative postseason next week and are assured a full PGA TOUR card for next season.  Read more

With the playoffs on the horizon, a field of Tour pros has made its way to Greensboro, North Carolina, for the Wyndham Championship at Sedgefield Country Club. 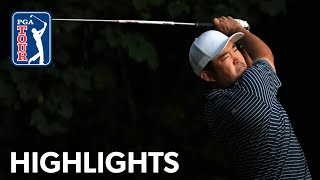