The Zurich Classic has its origins back in 1938, 83 years ago. It was the New Orleans Open for most of its first decade and was held on courses in New Orleans until 2004. In 2005 the venue moved to TPC Louisiana, though damage caused by hurricane Katrina moved it back for a year. TPC Louisiana is the tournament's home venue in 2021.

In 2017 the format was changed from individual tournament to team event. That first year's team event was won after playoff by Cameron Smith paired with Sweden's Jonas Blixt. Highlights from their winning round are in the video above.

Now in 2021 Cam Smith is back and is paired with Marc Leishman, and as others are saying, "Back the Aussies to Win!"

Reminder:  Last week at RBC Heritage Cam Smith shot his lowest ever round score, 62,  while Marc Leishman's brilliant second round at this year's Masters is here.

[Marc Leishman]  “We have a little bit of a point to prove regarding a potential Presidents Cup pairing. There’s no doubt. We combine pretty well. He’s a great driver of the ball and a great wedge player and I feel like I’m a pretty good iron player. We are both in decent form so we’re looking forward to the week for sure.”

[On the event]  Starting in 2017, the event officially turned into a team-event, meaning in order to participate, a player must pair up with another player. The two-man teams play a combination of best-ball and alternate shot. If those sound foreign to you, they are the same formats played the first couple days of the Ryder Cup and Presidents Cup; however, they are called Four-ball and Foursomes. In total, 160 players (80 teams) will tee it up, with the top-33 (and ties) teams making the cut.  Read more

[On team Smith// Leishman]  Both of these players can make birdies in bunches, but it's the alternate shot format where I think they will separate themselves in this matchup. Combine Leishman’s steady iron play with Smith’s unworldly short game and these two shouldn’t find much trouble when playing the more difficult format in Rounds 2 and 4.  Read more 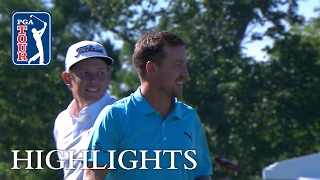