24 year old Blake Windred from Newcastle, NSW, has returned home from the Challenge Tour to secure his first professional win, at the 2021 Victorian PGA Championship at Moonah Links.

Just a few months ago, back in August - September, Blake was missing Australia very much. He talked about this around the time of the BN-L Challenge Trophy, and then at the Swiss Challenge in October he was the solitary Australian in the tournament. Now he is home.

Golf Australia rookie squad member Blake Windred has thrown the monkey off his back and claimed his maiden professional victory at the Victorian PGA Championship at Moonah Links today.

The 24-year-old from New South Wales shot a three-under par final round of 69 on the Open Course to finish twelve-under for the tournament and one stroke clear of playing partner Brad Kennedy.

It was a moment to savour for the European Challenge Tour player who described achieving one of his lifelong ambitions as “unreal”.  Read more

Windred began thinking about victory because of a chip-in eagle on the par-4 14th followed by a birdie on the par-5 15th which put him two shots ahead of Kennedy.  Read more

Back in March, Blake was a runner up in the Queensland Open, along with Bryden Macpherson and Deyen Lawson. Queensland Open winner Andrew Evans has just won again, this time topping the Japan Tour qualifying tournament. 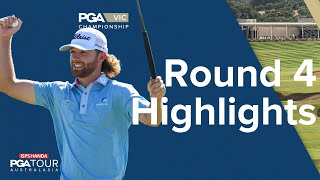