Celine Boutier matched a career-low score on Sunday with a final-round 63 in the ShopRite LPGA Classic presented by Acer to reach 14-under par overall and hold off Rolex Rankings No. 2 Jin Young Ko, No. 3 Inbee Park and a charging Brooke Henderson for the second LPGA Tour title of her career.  Read more

France's Celine Boutier matched the low round of her career with a bogey-free eight-under par 63 on Sunday to capture the LPGA ShopRite Classic, winning her first US title.

The 27-year-old closed with two birdies in her last three holes to finish the 54-hole event on 14-under 199 at Seaview Bay in Galloway, New Jersey.

That was enough for a one-stroke victory...  Read more

From the Daily Mail UK, by AP:

Celine Boutier birdied two of her last three holes for an 8-under 63 and won the ShopRite LPGA Classic on Sunday when South Korea's best two players faltered down the stretch Sunday.

Starting the final round five shots behind, Boutier ran off six birdies on the front nine of the windy Bayside Course at Seaview to join a growing list of contenders.

Canadian Brooke Henderson joined Jin Young Ko and Inbee Park in a tie for second, 13-under.

The Bay Course opened in 1914 and was designed by Hugh Wilson and Donald Ross. The 6,300-yard layout is less a test of length, and more a test of imagination, accuracy and short game. The Bay Course presents a Scottish-links feel, dramatic seaside views, deep pot bunkers and small undulating greens. 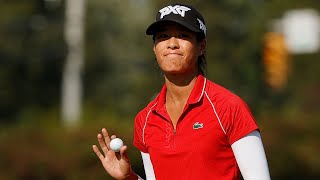