Viktor Hovland's clubs delayed for days and one is broken, en route to Kapalua

Viktor Hovland arrived at Kapalua in plenty of time to get in some practice. Last year, his first at the TOC, he had left himself no time to become familiar with the course before play began. This year he arrived early, but his clubs did not. After a delay of six days they finally turned up but the bag was damaged and one club was broken.

KAPALUA, HI – Despite being in idyllic Maui, it was getting tough for Viktor Hovland to sport his trademark smile.

The Norwegian superstar arrived on the island for the Sentry Tournament of Champions on the Dec. 29, set for a week of preparation after a holiday break in his home country. Alas, his golf clubs failed to join him.

Flying high after recent wins at the World Wide Technology Championship at Mayakoba and the Hero World Challenge during the last two months, Hovland had put away his clubs in Oslo’s winter conditions to reconnect with family and friends over Christmas. He was content the week in Maui would bring sufficient time to get his swing back into a groove.

But in the end the world No. 7 had just 24 hours to prepare after his trusty Ping sticks failed to follow him on a travel adventure halfway around the world.  Read more

When Viktor Hovland made his Sentry Tournament of Champions debut a year ago, he was in no rush getting to Kapalua after the holiday break. But the lack of preparation proved costly, as Hovland tied for 31st and beat just eight players. This year, Hovland, who is riding a two-start winning streak, made sure to arrive early in Maui, flying in last Wednesday.

Unfortunately for Hovland, his golf clubs didn’t get the memo.  Read more

"It seemed the golf bag was just somehow sitting in Seattle for five straight days," Hovland said. "I was concerned they lost it initially. And then after a couple of days, they said they physically had it. That got me more frustrated. If you can see the bag, it shouldn't be that hard to put it on the flight."

So instead of getting back to work, Hovland was back on vacation. He went to the gym and to the beach. He did manage to play a little golf, using the clubs of caddie Shay Knight.  Read more

How Viktor got into golf - Practiced on an open field 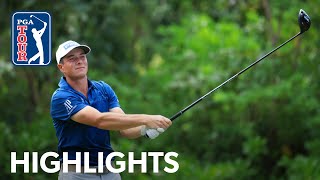