Irish golfers are finally dusting off their clubs

A long time between rounds for Golfers in Ireland

For Golfers in Northern Ireland the long wait is over. "Golfers hit the fairways to heaven as courses reopen", is the heading in the Belfast Telegraph:

Back in the swing ... but some players were a little rusty after four-month Covid ban

Just over four months since they were last allowed to welcome members, golf courses flung their gates open again on Thursday as thousands took to the fairways once more.

Having shut down post-Christmas when Stormont increased lockdown restrictions to combat rising Covid-19 cases, a subsequent easing of those restrictions permitted golf to resume in Northern Ireland on Thursday and, while it wasn't a complete relaxation of the rules, that didn't stop tee times from being booked up days in advance...  More here

In the Republic of Ireland, however, where golfers have been living with the longest closures in the world, the reopening of courses has not yet quite arrived. From the Irish Times:

At this rate, there’ll be some kind of slow play penalty to be applied when golfers finally get into the swing of it. But at least the countdown is on – just a few more ticks on the clock for those in Northern Ireland, over three weeks longer for those golfers domiciled in the Republic – for a return to the fairways, which have been lying unused for most of the past year...

...At last, golf clubs can be retrieved from cupboards, garden sheds and garages and dusted off with a return to play in sight.

With golf club members in the North resuming a form of play on Thursday, April 1st, the Irish Government’s decision to give a green light for golf clubs in the Republic from April 26th will come as some relief for the men, women, boys and girls – numbering almost 200,000 – who are members of clubs and who will be able to get playing again. Full Article here

The video above is from Melbourne's Aussie Travelling Golfer and takes you to the Old Head Golf Links on the southern coast of Ireland. 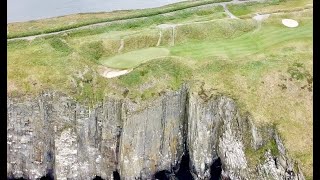