Richie Ramsay ended his seven-year wait for a fourth DP World Tour title as he nervelessly holed his tricky par putt at the 18th to win the 2022 Cazoo Classic by one shot.

Overnight leader Julien Guerrier had been the man to catch for most of the day at Hillside Golf Club but birdies at the 14th, 15th and 17th saw Ramsay head to the last with a one-shot lead.

The 39-year-old missed the fairway off the 18th tee but managed to give himself an eight-foot par putt, which he duly holed to sign for a closing 69. Read more

The No. 329-ranked Ramsay punched the air and roared with delight after holing a par putt from 10 feet at the last hole at Hillside near Liverpool, northwest England.

Englishman Paul Waring, who led after the first two rounds, shot 70 and was alone in second place.  Read more

An emotional Richie Ramsay dedicated his Cazoo Classic victory to daughter Olivia after holing an eight-foot putt on Hillside's 18th hole to win his first tournament in six years.

The Scot produced a brilliant finish, with three birdies in the last five holes, but it was a two-putt from the front of the green which secured a round of 69 for a 14-under-par total and a one-shot victory over Paul Waring which started the tears flowing.

Ramsay had promised his daughter he would win a trophy for her as he had not tasted victory since she was born and had collapsed on the final hole in May's British Masters at The Belfry.  Read more

Viewers were treated to an exciting and tense final round at Hillside Golf Club, with a number of players vying it out for a DP World Tour title. However, in testing conditions, it was Scotland's Richie Ramsay who came out on top, securing his first trophy since the 2015 Trophée Hassan II.

It was an emotional victory for Ramsay who, just a few months ago at the British Masters, suffered the "biggest kick in the teeth" after duffing his second shot from the middle of the fairway into the water. Eventually, he walked off with a double-bogey six to miss out on the title.  Read more 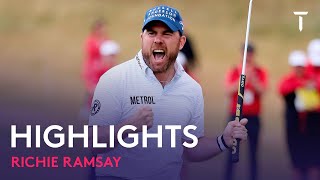