Back in December-January, Viktor Hovland was heading to Kapalua to play in the Tournament of Champions when his golf clubs vanished en route. Eventually they did turn up, but his golf bag was damaged and his driver shaft was broken.  That misadventure was covered here.

Viktor's driver shaft had been broken before (yet that time he went on to win!) and now his travelling clubs have vanished again. This time his clothes and travel luggage disappeared along with his clubs, on their way to the Scottish Open.

A few months prior to his trip to the TOC, Hovland’s driver was snapped by Danny Lee on the range at the World Wide Technology Championship at Mayakoba. He was lucky enough to use one of James Hahn’s backups that week — and he went on to win.

So, attention bettors, you might want to put some units on Hovland this week as yet again he’s without his clubs at a PGA Tour event.

Ping is reportedly building him a backup set on property.  Read more 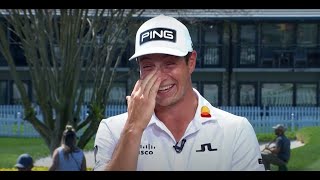