The original settler was John ‘Tinker’ Campbell and the property formed part of the Tamrookum Run in the early 1840s. William Barker subsequently owned the property and employed James Stephens, Queensland’s first poet, as a private tutor for his family and it was at Kooralbyn that his first poem, “Convict Once” was written.

In 1890 William Cochrane Bundock bought the property, at the going rate of 29 shillings per acre. Over the next 43 years it remained in the Bundock family and was developed to its full potential as grazing land.

In 1973 the idea of the “The Kooralbyn Resort” was born when two Sydney Knights – Sir Peter Abeles and Sir Arthur George, acquired the land in concert with others including financiers, planners and marketers, all dreaming of a totally new concept in tourism, hospitality and community living that could benefit everyone. A place where guests could get away from the “rat race” of the major cities and escape to this tranquil inland oasis and relax.

By 1979 the first phase of the building construction was underway and the project was taken over by AGC, a subsidiary of Westpac, Australia’s largest financier at the time. AGC completed the first phase and positioned “The Kooralbyn Resort” as Australia’s first Integrated Golf Resort.

In 1988 the property was acquired by a large Japanese hotel group, Towa, who successfully managed the property until 2002 when it was acquired by New Zealand hotel operator Ray Schofield, before closing in 2008 due to its financier, MFS, going into receivership in the wake of the Global Financial Crisis. The Resort was dearly missed by the local community and repeat guests that had frequented the Resort during its former glory period.

Fortunately, Brisbane-based Yong Real Estate Group founder, Peter Huang, eventually purchased the property in 2013 – for the first time in history, the Resort being owned by a Queenslander. Mr Huang initially invested over 10 million dollars to restore the property to its former beauty before it reopened.

The Resort and Golf Course successfully reopened in June 2016, offering dozens more guest activities which can be incorporated into your stay.

Challenge yourself on our multiple award-winning golf course, which was ranked Australia’s #1 Resort Golf Course in 1987, pioneered by golf legends and long term Kooralbyn residents Norman Von Nida and Randall Vines, with previous World No. 1 Greg Norman as its previous Tour Professional and in more recent times, well known for being the former home course of World No. 1 Jason Day and Adam Scott. The spectacularly challenging golf course is anticipated to be back in Queensland’s Top 3 within one year of its reopening.

Guests are also invited to indulge at the Resort’s wellness and health spa, utilise our equestrian and polo fields (as previously done by Kerry Packer), arrive in style on our private airfield, or take part in our laser clay pigeon shooting, Aussie Muster Show, horse trail rides and many other sport and eco activities.

Ramada Resort Kooralbyn Valley is the ideal setting for conferences and weddings, with large fully equipped meeting and function spaces, plus quality catering and accommodation, all situated in a unique environment with stunning views over our international golf course, lakes and bushland.

Enjoy your time at our beautiful piece of paradise! 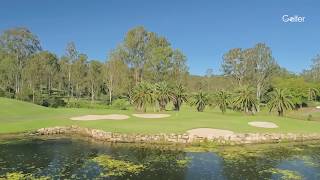 When David Zahra and Elias Sarkis took over the 19th Golf Driving Range in Sydney’s west, they felt they had a blank canvas at their disposal and b... Golfing Made Easy with Batteries and Accessories from R&J Batteries

Golfers need a lot of accessories from clubs and towels to cooler bags and much more. However, the accessory that could let you dow... In the April Issue, I wrote a “Business Spotlight” feature on Australian Golf Equipment (AGE) and their full rangeof golf products ...

Hitting the ball a long way with driver is a fun and challenging aspect of the game. People are always looking for length off the tee for a var...

FOR many in the golf industry, 2020 was a year that we’d all like to forget. The global COVID-19 pandemic, combined with lockdowns an...

We Tried It – New Callaway Apex/Epic clubs and Clubfitting Studio

For over a decade, I’ve been espousing the benefits of getting properly fitted for a set of clubs. Buying a stock-standard set of clubs “off the ...

The new Golf Australia Handicap App is now available for free in the Apple App Store and the Google Play Store.

The app is a convenient and...

The Apex 21 Hybrids are suited to help a wide range of players. They feature new Jailbreak A.I. Velocity Blades designed to increase vertical ...

Tour Tee continues to prove popular around the globe. Now available in three great options including, COMBO, PRO and MINI.